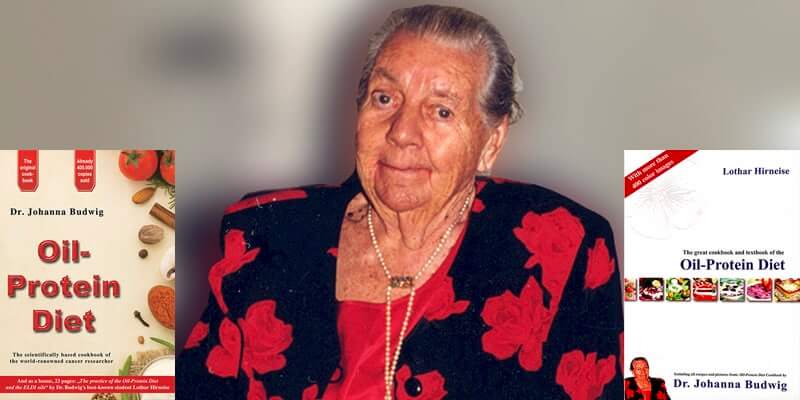 Lothar Hirneise (co-founder of the 3E-Center in Remshalden-Buoch – close to Stuttgart in South Germany) became a close friend and colleague of Dr. Johanna Budwig (1908-2003), who authorized him to promote and teach her anticancer protocol, which includes her famous mixture of flax oil, quark, and milk. The strict and correct application of the Budwig protocol makes the 3E Center unique. Lothar is firmly convinced that the Budwig protocol is the main reason why he gets such outstanding results for cancer patients.

Johanna Budwig was born on September 30, 1908. Her parents were Elisabeth and Hermann Budwig. Her father worked as a mechanic and her mother was a housewife who died in 1920. After graduating, she joined the Deaconess institution of Kaiserswerth in 1926 and worked as a deaconess. The institution allowed her study and she enrolled in the fields of Botany, chemistry, physics, medicine and biology. First she obtained a doctorate in physics and chemistry and pharmacy. Then, she controlled the home pharmacy of the Deaconess Institute, which she controlled from 1939 to 1948. After that she went to her scientific stepfather: Prof. Hans-Paul Kaufmann. There she worked in fat research and published a work on the differentiation of fat for the first time in 1950 and became head of the institute for pharmaceutical products and fats at the Federal Institute for research of fat in 1951.

Over many years, she developed the Oil-Protein started to treat cancer patients. Up in the 70s she held more than 200 lectures worldwide, and retreat then more and more from the public, because the attacks against her became massive. Meanwhile pulled out of Bad Zwischenahn to the Black Forest, she focused on the treatment of cancer patients that she treated in her practice in Dietersweiler, just a few kilometers away from the Hotel Lauterbad, in which she also applied the laser therapy for many years.

1998 she became a close friend to Lothar Hirneise, president of People against Cancer Germany. Together, they held several lectures both in 1998 and 1999 on alternative cancer therapies and the Oil-Protein Diet in particular and published two books together. Also, Dr. Budwig began a collaboration with Lothar Hirneise and received and treated again more patients.

The 3E-Center and the only original Budwig Center

The 3E-Center was founded in 2006 and run by Dr. Budwig’s only pupil, Lothar Hirneise, who studied with Dr. Budwig for 4 years before her death and who is the only person who wrote two books together with her.

In our Budwig Center Germany we offer the 3E-Program. The Budwig Protocol is offered in addition to natural detoxification measures and various types of energy and mind work and applications.

This is the only place worldwide where you are guaranteed to receive Dr. Budwig’s Oil Protein Diet in its completely original form, i.e. the form which Dr. Budwig taught and with which she reaped unusual cancer treatment successes.

The 3E-Program is a 4 week residential program delivered in our Center in southern Germany – the place in which Dr. Budwig lived and worked. The entire program is offered in English language and is ideal for people with cancer interested in implementing the Budwig approach. We offer an excellent track record for helping an impressive number of so-called terminal cancer patients recover and/or to dramatically extend their lifespan.

Unfortunately we have observed that several years after Dr. Budwig’s death in 2003, some health professionals have rebranded themselves as „Budwig Centers“ or have become self-appointed „Budwig Experts“ or „Budwig Therapists“ and thereby misleading cancer patients. With our center and our program we want to make sure that you have access to the only place worldwide deserving to be called „Budwig Center“ and to offer the original Budwig Therapy Program for people with cancer.

“The Budwig Center Germany is not associated in any way with the Budwig Center in Malaga / Spain. In our opinion, the protocols and recommended treatments of that Center, are not consistent with the teachings of Dr Johanna Budwig, which we follow very strictly. Our co-founder Lothar Hirneise worked closely with Dr Budwig for several years and the protocols used by our center are faithful to her teachings. It was those specific teachings that gave her great results.”

Sign up to receive our free guide to the Original Oil Protein diet and also receive regularly our latest information, offers and updates related to our 3E-Program and 3E-Center.

Your data will only be used to personalize our regular information that you will receive and not be passed on to any third parties. You can unsubscribe at any time from our newsletter and also at any time revoke your consent by email to  info@3e-zentrum.de. For more information about privacy, please go to our Privacy Policy.

Our alternative 3E – Program is based on what people have actually done to survive cancer. We have learned from them and have incorporated this knowledge into our 3E program. Treating cancer with alternative strategies and without chemotherapy has become a possibility for an ever-increasing number of people.

Cookies are used to improve your experience on our website. If necessary, cookies are categorized and saved in the user's browser. Cookies are essential for the functioning of the basic website functions. We also use third-party cookies that allows to understand how our website is in use. Here you have the option to deactivate all unnecessary cookies.
Necessary Always Enabled
Necessary cookies do not store personal information. They are essential for the basic functions and security features of the website to work properly.
Non-necessary
All cookies that may not be particularly necessary for the functioning of the website and that are used specifically to collect personal data of the user via analyzes, advertisements and other embedded content are referred to as unnecessary cookies. It is your decision whether your surfing behavior should be optimized for an optimal surfing experience or not.
SAVE & ACCEPT
Translate »